I can’t believe we’ve gotten to be Eloise’s parents for a month! She’s the most precious, lovely little lady and we feel so blessed God chose us to be her parents. I don’t think I could ever adequately put into words how much we love her. We spend these winter days snuggling and kissing her constantly. I absolutely adore this newborn stage. I just can’t believe these bump pictures were a month ago. Time is moving so quickly (way too quickly), but there are so many things I’m looking forward to doing with her and teaching her. I can’t wait to see what each day brings and how she grows. I can’t wait to teach her how to be a friend and love learning. I can’t wait to take her to New York City and Paris (and the rest of the world) one day with her girl cousins. I can’t wait to see how she experiences the world and learns to love those around her. We pray daily that she’s a joyful, kind, fun, generous, selfless person who never goes a day where she doesn’t know God’s love for her or our love for her. 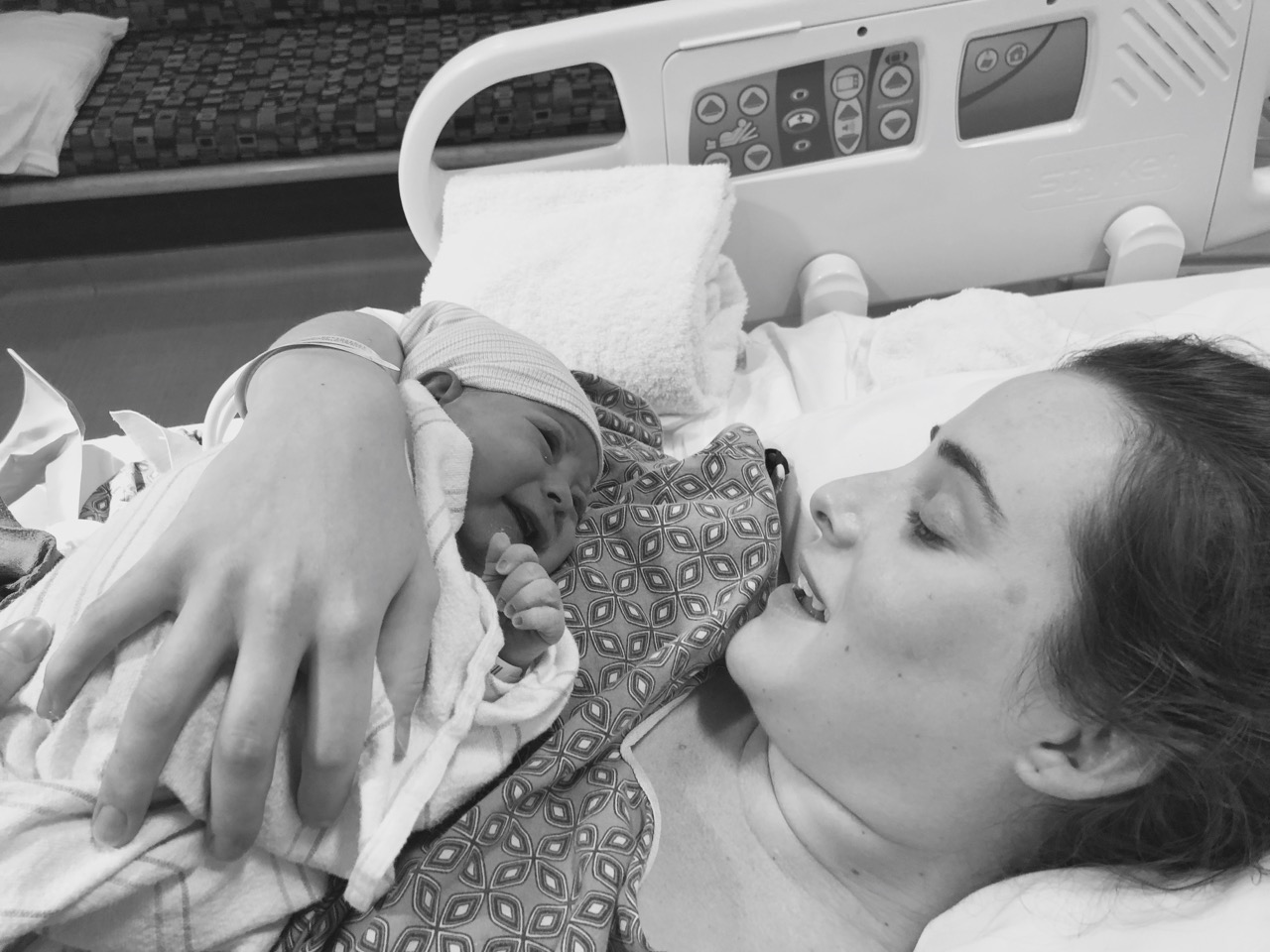 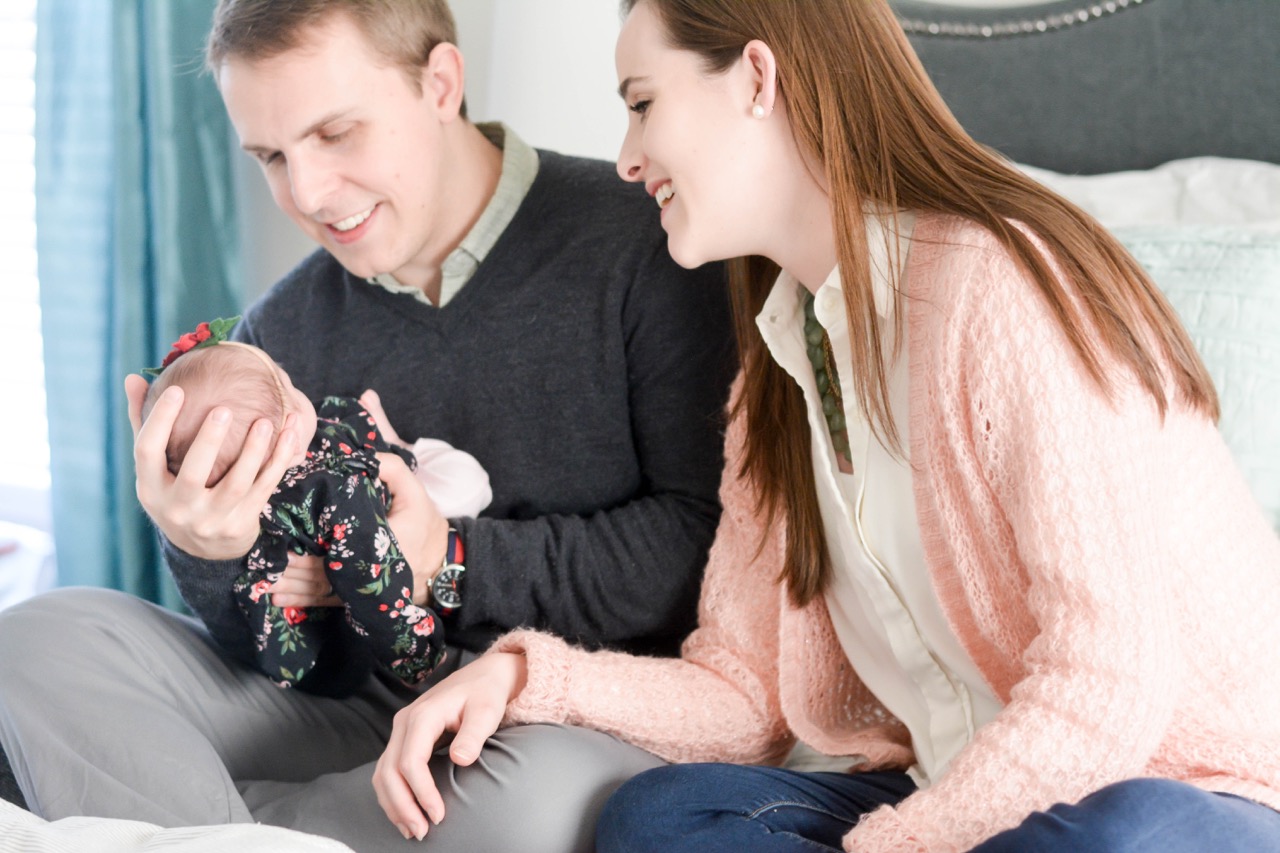 As my sister said to me, “When you meet your baby, you wonder how you ever went all this time without them.” I don’t really know what we did before her and I also can’t believe we used to think we were tired. Ha! 😉 I’ve never been more tired or more happy in my entire life. Mostly, I just can’t believe she’s ours and I find myself constantly thanking God that this is our life.

Her birth was a really great experience and I have to say I’m a little bit shocked by that. I went into birth with as little of expectations as possible, but in the back of my mind, I was terrified of the unknown. I was sure birth would be traumatizing and quite frankly, horrifying. It was anything but that. And I think it’s important to talk about good birth experiences, because you are constantly hearing about the bad ones. 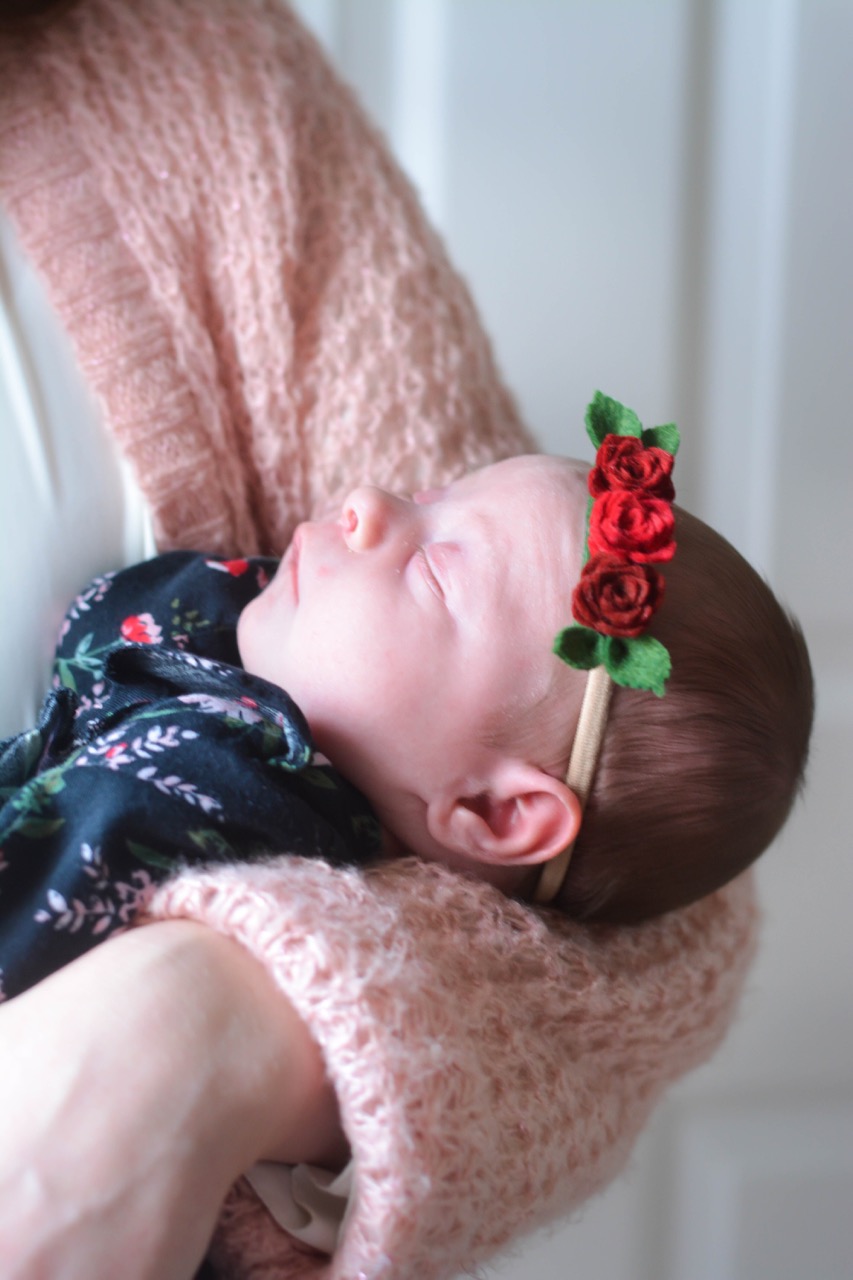 My due date was December 13th, but I was mentally preparing myself to go late because I kept hearing most first time moms are late. So I was surprised when I started feeling what seemed like mild cramps on December 11th. We had just come out of a snow storm and it was freezing, so Matt decided to work from home that day just in case this was something real. I remember being on the phone with my mom and telling her what I was experiencing. She told me she thought it was a real start to labor, but I was definitely in denial. All through Monday night and Tuesday, my contractions got worse but sporadic. We went to the doctor Tuesday and she said my exam felt very different and that I would have my baby in the next 24-48 hours. Tuesday night was pretty brutal. The longest break I had was 12 minutes between contractions. They weren’t a consistent 5 minutes apart, but would be 3 minutes and then 8 minutes. I was also shaking a lot and throwing up (apparently flu like symptoms are labor signs for some people…yay.). So I never got those consistent 5 minute apart contractions, but I knew it was time to head to the hospital on Wednesday morning. 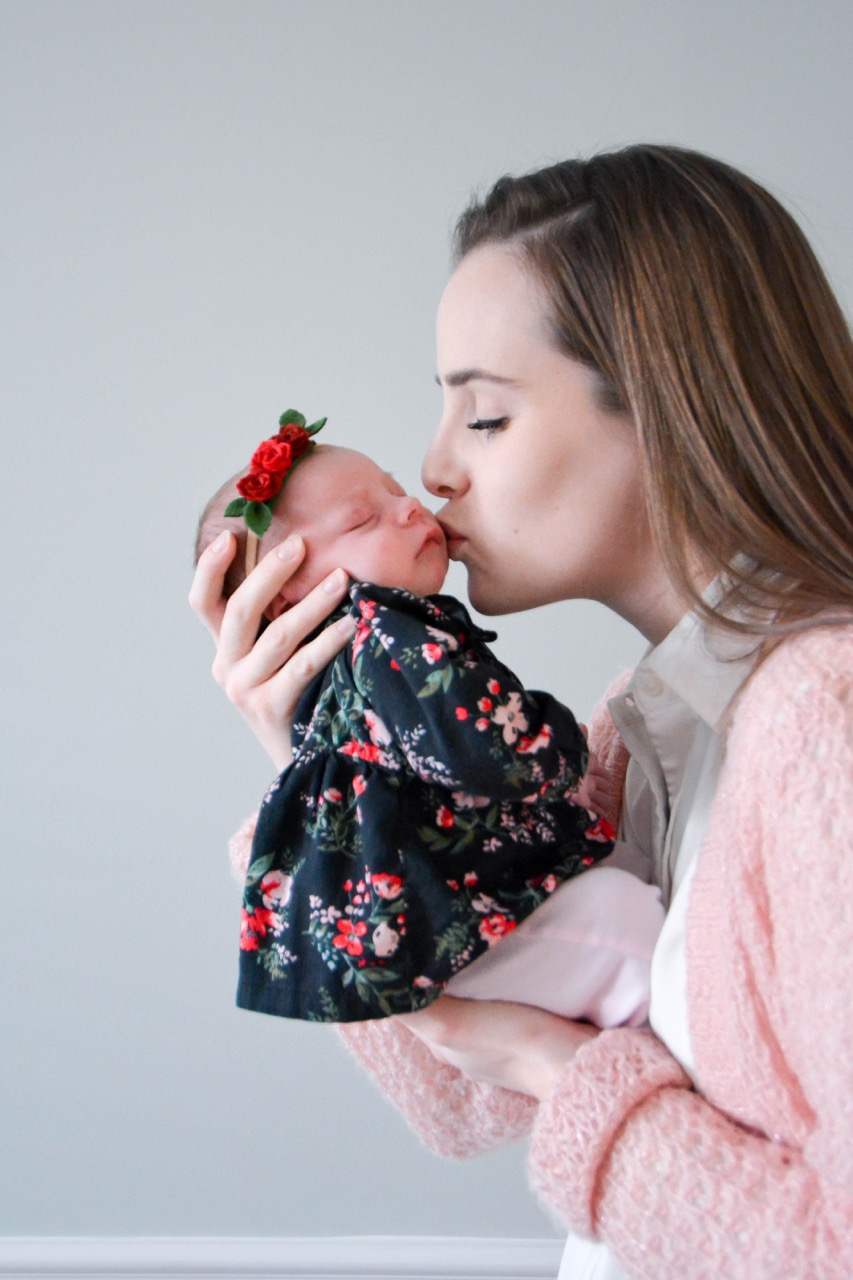 We checked into the hospital around 11:30 and I can’t say enough good things about our hospital experience. Every nurse and person we encountered treated us with such kindness. In moments like birth when you’re scared of the unknown, I think having caring people around you means everything. Once we were put into a labor room, they checked me and I was at 2-3cm but because I was exactly 40 weeks, they said they’d keep me. After all the questions the nurses have to ask, they asked if I wanted an epidural now. YES. After two days of contractions and pain, I knew I needed some reprieve if I was going to push this baby out. My epidural took all of 7 minutes to administer and it doesn’t hurt one bit. It sort of feels like when I get allergy shots…just a bit of burning and then suddenly you can relax. I started cracking up when my legs began to feel heavy, because they just feel like foreign objects at that point. Also, the anesthesiologist who gave me my epidural let me lay on my side instead of sitting up…which was very helpful because I was also shaking constantly from the pain and hormones. After the epidural, they do your catheter (also doesn’t hurt because you can’t feel anything). From that point on, we just sort of hung out and I tried to relax as much as possible. 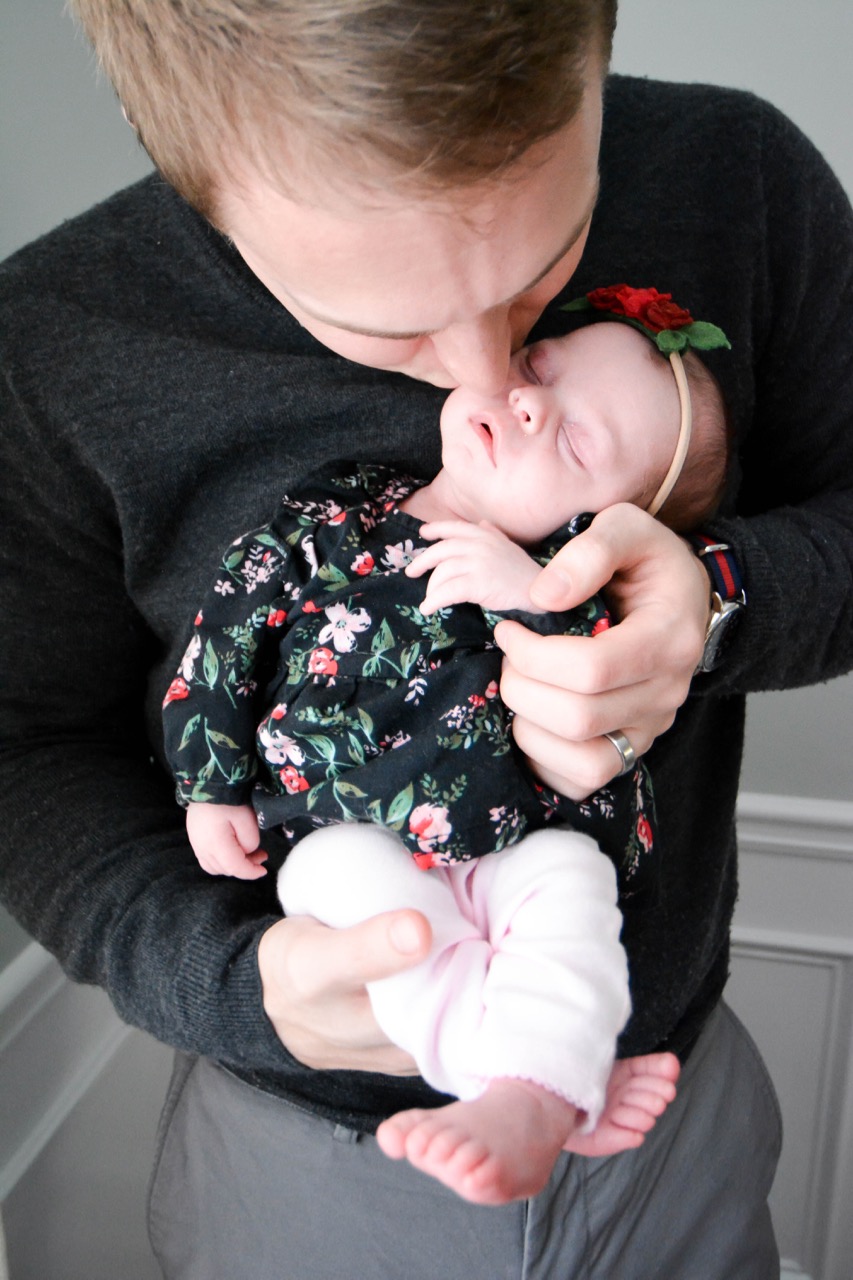 A few nurses and midwives came in to check on me. They checked me again about an hour later and I was at 4cm. Eloise’s heart rate dipped at one point so they had to flip me over to the other side (epidurals work with gravity), but thankfully that was the most dramatic thing that happened. After that, they watched me for a little while before giving me Pitocin. After the Pitocin and them breaking my water (also doesn’t hurt because of the epidural), I quickly went to 6cm and then I had a pretty intense bout of throwing up. One of the nurses said she thought it was almost time and that she thought I was going to have this baby quickly. Sure enough, I was at 9.5cm! Suddenly, there were people all over the place getting the room ready…a pediatric team, more nurses, etc. I “practiced” pushed for an hour, which didn’t really feel like an hour. I guess that part is to help get the baby’s head further down. I threw up again at this point, so they gave me some medicine to tone that down. I mean, seriously, you can’t push a baby out while puking. That’s too many abs working in two different directions, haha! 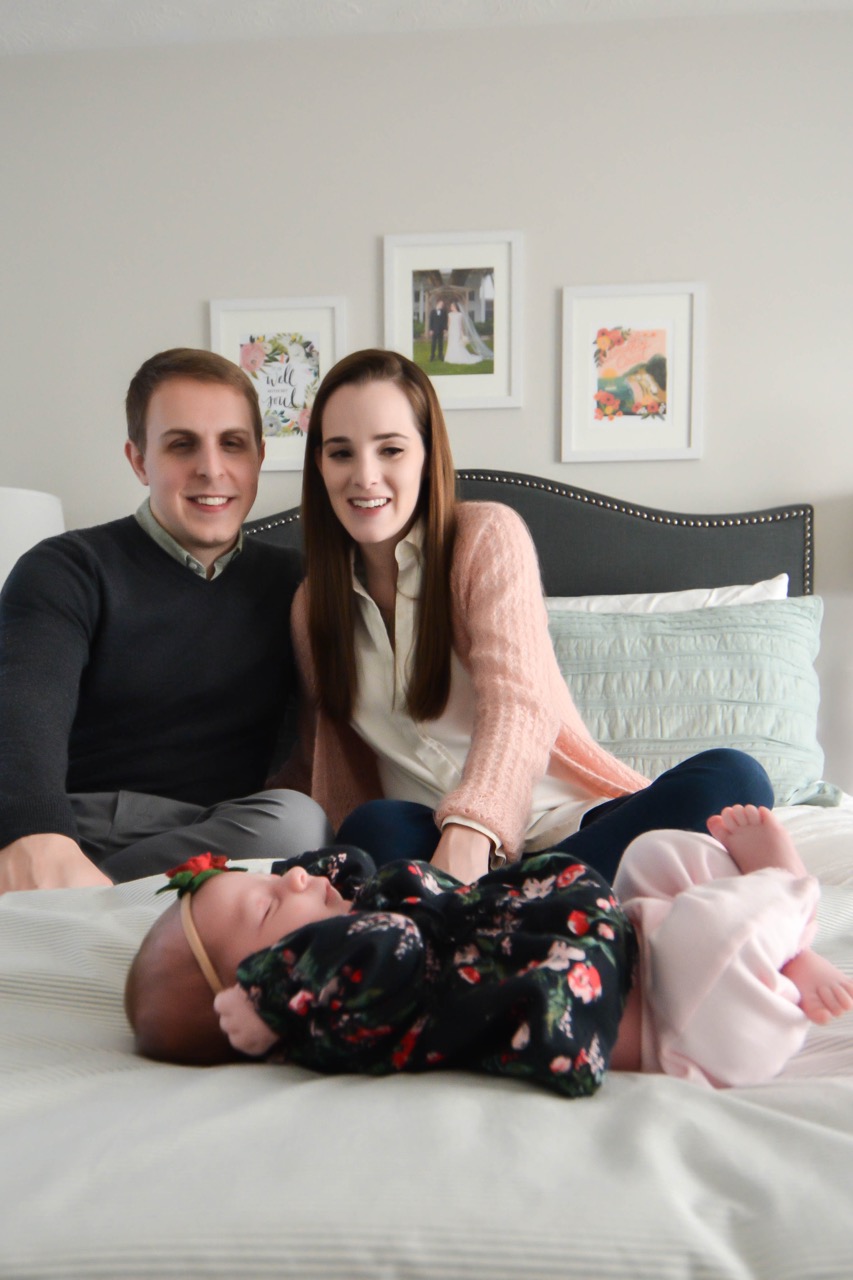 After that, the doctor came in and I pushed with her for an hour. Basically, pushing is just the most intense ab workout you’ve ever done. My epidural had actually worn off at this point, so I could feel the contractions to push with them and I could feel Eloise hanging out on my right side as she tried to make her way out. They offered to top off my epidural, but I’m glad I let it wear off a bit so I could actually push with the contractions and feel what I was doing. They kept telling me Eloise was almost here but I started to not believe them and I remember a thought crossing my mind, “just get her out however you need to, because I can’t push anymore.” Matt told me she had brown hair and that she was almost out. I think the nurses could tell I was getting discouraged because they asked if I wanted to feel the baby’s head. I was hesitant at first, but then I felt it and that was all the motivation I needed to get her the rest of the way out. A few more pushes and she flew out at 9:17pm on her due date, December 13th! Only a small percent of babies are actually born on their due date, so that was really cool. She was 7lb 11oz and 21 inches long. It was so surreal because all the sudden I had my baby  laying on top of my belly instead of inside. I just remember thinking how weird it felt that my belly instantly deflated. Eloise came out screaming but when they gave her to me, she instantly calmed down. It was the sweetest thing and a moment that will always be one of the highlights of my entire life. I just remember thinking she looked just like Matt and it was so strange to have her actually on the outside after a year of waiting on her. 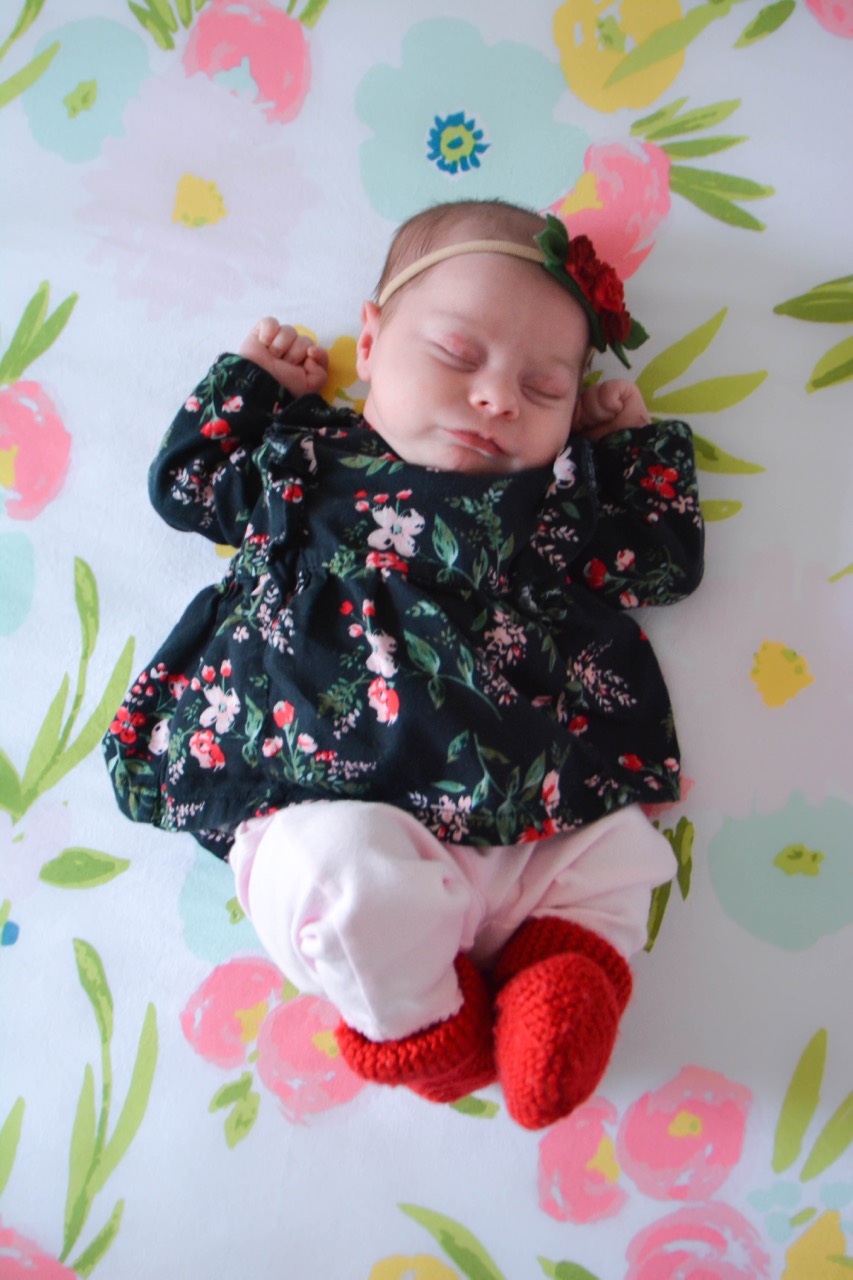 Across the room, they cleaned up Eloise and suctioned out her lungs/nose since she had ingested her meconium. After I got all stitched up (which was probably the worst part of labor), we got to do golden hour with Eloise and it was so precious. She has been a champion nurser from the start and sweet as can be. We got to go home 48 hours later and I have to say, taking her home was so strange. I kept thinking, “She’s ours? We get to keep her?” 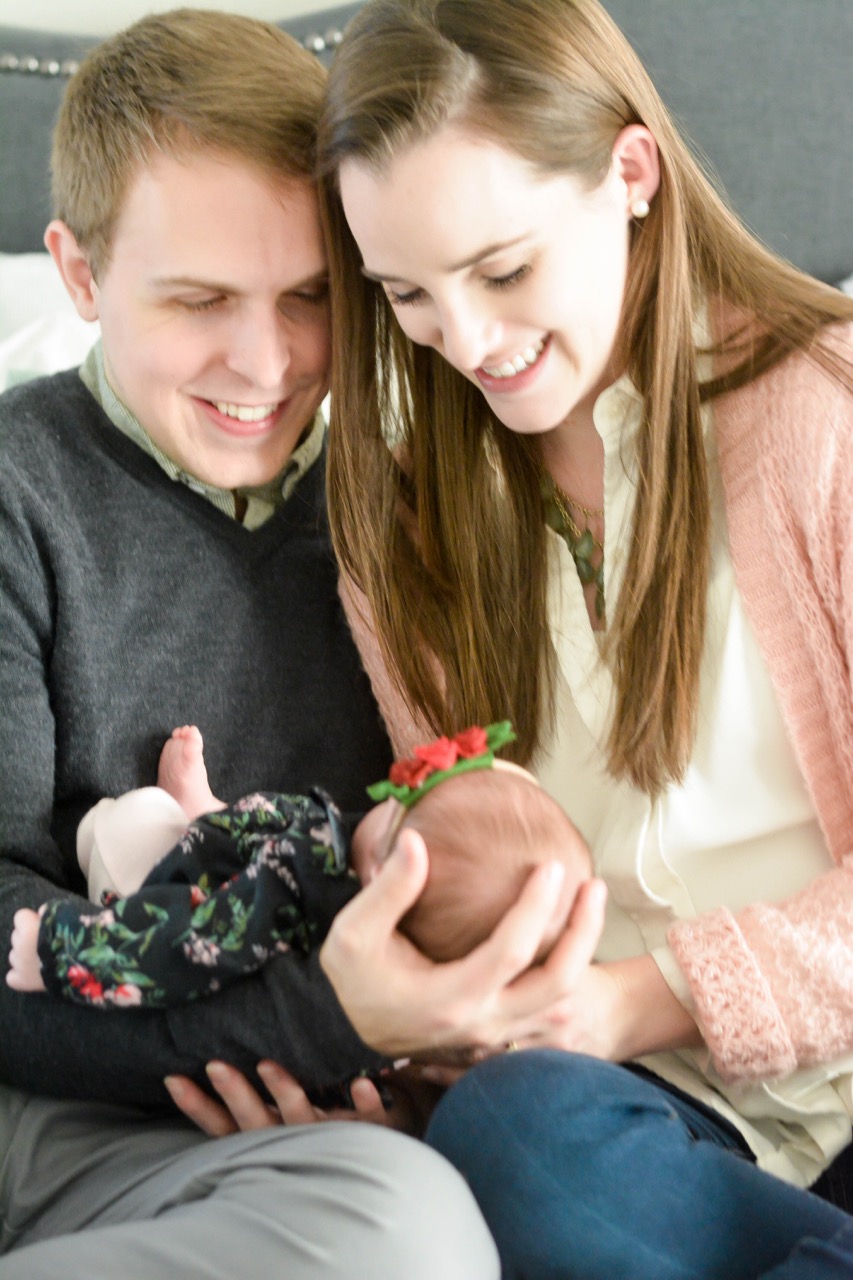 After going through birth, I’d happily do it again. I know there’s a lot of controversy and opinions on how to do birth, but I think all women who bring a kid into the world are champions no matter how they brought their kid into the world. To each his own. I’m so thankful for a really beautiful experience, modern medicine and the most supportive husband I could ever ask for. I’m really grateful I went the epidural route and didn’t have a birth plan, because then I was able to enjoy Eloise’s birth for what it was rather than being disappointed because it wasn’t going as I planned or expected. From what I’ve learned so far about motherhood and birth, I think it’s all about learning how little control we really have over things and learning to be flexible. 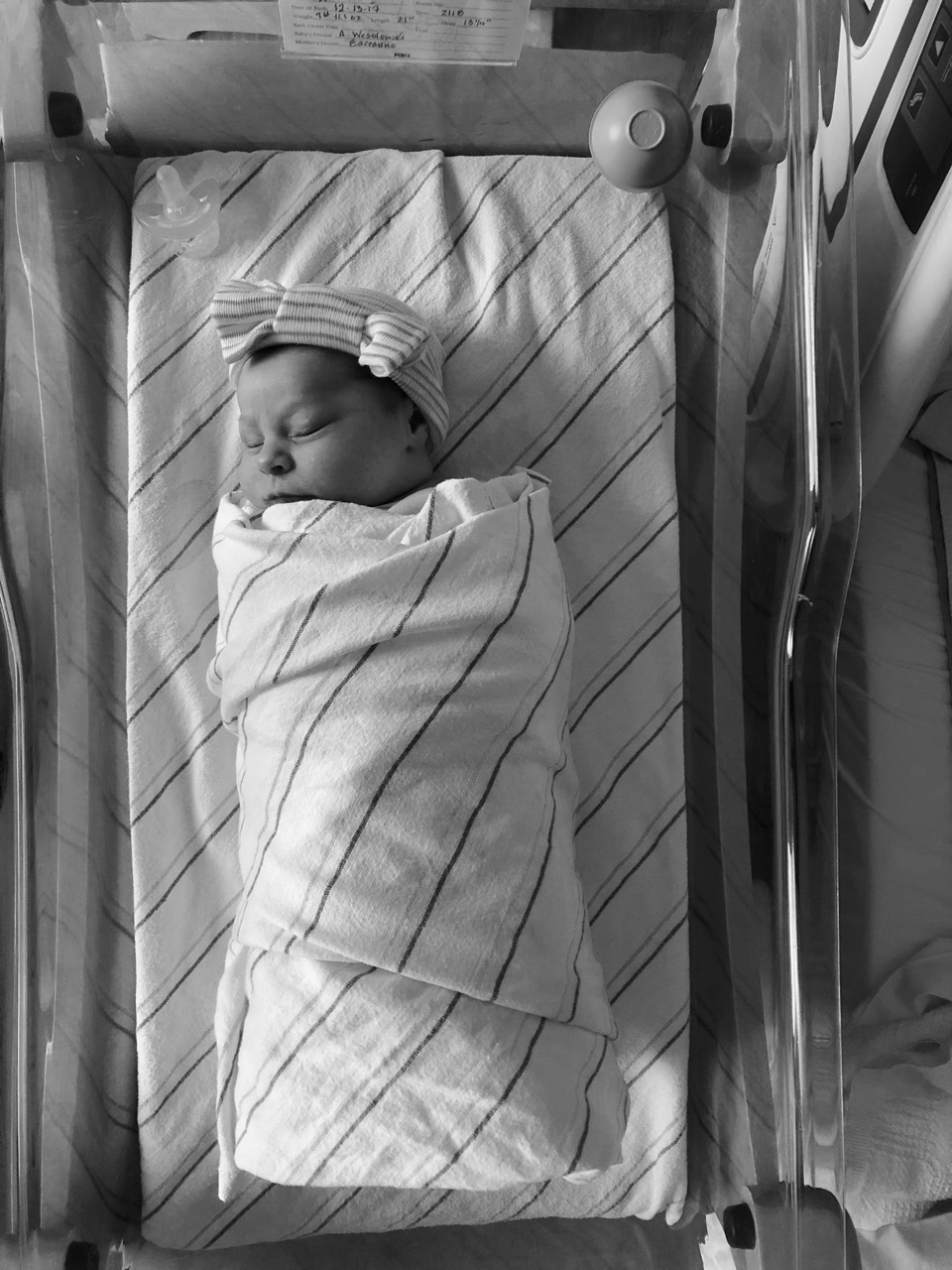 Happy 1 month, sweet Eloise! We love you more than you will ever know.

I’ll be soaking in each day, because it’s already going way too fast.

Most of these photos are by our sweet friend, Amanda!

Ps. Pretty soon, I’ll have a post about our favorite baby items and what helped during the first month with Eloise! 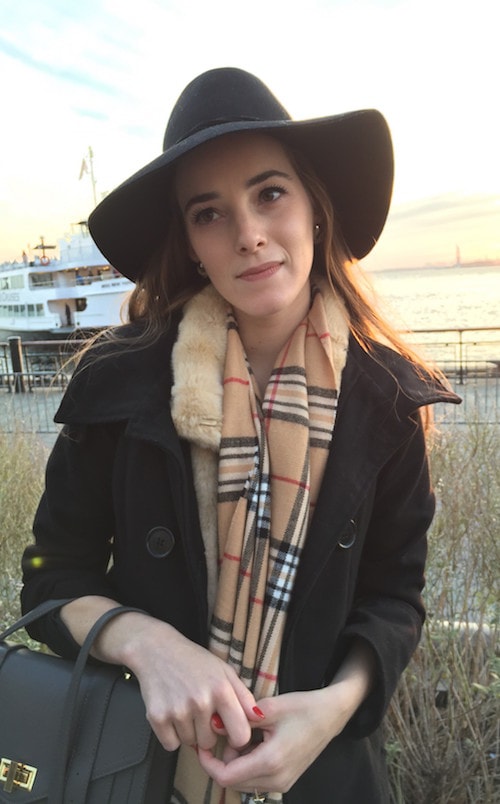 Hi, my name is Aubrey! Welcome to my little corner of the Internet. I hope you enjoy reading along as I share all about my adventures as a newlywed, travel enthusiast & lover of the little things in life. Thanks for stopping by! :)